Mummies in a Cave

Two mummies were found in a cave in Chihuahua, Mexico. 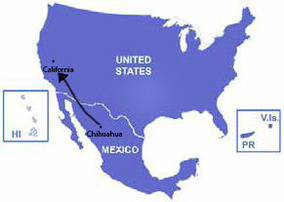 Two Lemon Grove mummies were found in Chihuahua, Mexico in a cave by two teenagers in 1966. The teenagers' names are unknown. When the teens found the mummies, the other dead bodies that had been buried became dust or was eaten by animals. No objects were found with the mummies in the cave. The teens purposely crossed the border in search of mummies. After a month, they found the two mummies and stole them across the border to California. They hid the mummies in their friend's garage. Fourteen years later, their friend's mother discovered the mummies in a compartment while cleaning out the garage.

The Lemon Grove mummies were Mexican Indian. Scientists strongly think that the cave the mummies were found in, was a Mexican Indian burial ground. Local Indian tribes buried their dead in caves around Chihuahua. They were named as the "Lemon Grove" mummies because the teens stored them in their friend's garage in Lemon Grove, California and remained there until someone came and found them.

The infant mummy was 1 year old, and Lemon Grove Girl was 15 years old. CT scans, X-Rays, carbon-14, and other dating methods revealed that the mummies were around 800 years old. The mummies were preserved accidentally, but naturally because of the cool, dry air in the caves. The mummies were dried up because of the air. They were well preserved because the water in their bodies dehydrated and the bacteria could not live in there any longer. So, they still had skin and hair left on their bodies.